Diagnostic imaging techniques help narrow the causes of an injury or illness and ensure that the diagnosis is accurate. These techniques include x-rays, computed tomography (CT) scans, and magnetic resonance imaging (MRI).

These imaging tools let your doctor "see" inside your body to get a "picture" of your bones, organs, muscles, tendons, nerves, and cartilage. This is a way the doctor can determine if there are any abnormalities.

X-rays (radiographs) are the most common and widely available diagnostic imaging technique. Even if you also need more sophisticated tests, you will probably get an x-ray first.

In this x-ray of an ankle, the tibia and fibula bones are fractured. The pieces of bone are severely out of place.
Reproduced from Crist BD, Khazzam M, Murtha YM, Della Rocca GJ: Pilon fractures: advances in surgical mgmt. J Am Acad Orthop Surg 2011; 19: 612-622.

The part of your body being pictured is positioned between the x-ray machine and photographic film or digital x-ray sensor. You have to hold still while the machine briefly sends electromagnetic waves (radiation) through your body, exposing the film to reflect your internal structure. The level of radiation exposure from x-rays is not harmful, but your doctor will take special precautions if you are pregnant.

Bones, calcifications, some tumors, and other dense matter appear white or light because they absorb the radiation. Less dense soft tissues and breaks in bone let radiation pass through, making these parts look darker on the x-ray film.

You will probably be x-rayed from several angles. If you have a fracture in one limb, your doctor may want a comparison x-ray of your uninjured limb. Your x-ray session will probably be finished in about 10 minutes. The images are ready quickly. They are either developed from the x-ray film or written to a CD to be viewed on a computer screen.

In some circumstances, a contrast material or dye may be injected into a joint while x-rays are taken. This procedure, which is called an "arthrogram," helps to outline soft tissue structures in the joint. It may also confirm needle placement in the joint when fluid is removed or medication is injected into the joint.

X-rays may not show as much detail as an image produced with more sophisticated techniques. They are, however, the most common imaging tool used to evaluate an orthpaedic problem and are readily available in most doctors' offices.

Computed tomography (CT) is an imaging tool that combines x-rays with computer technology to produce a more detailed, cross-sectional image of your body. A CT scan lets your doctor see the size, shape, and position of structures that are deep inside your body, such as organs, tissues, or tumors. Tell your doctor if you are pregnant before undergoing a CT scan. 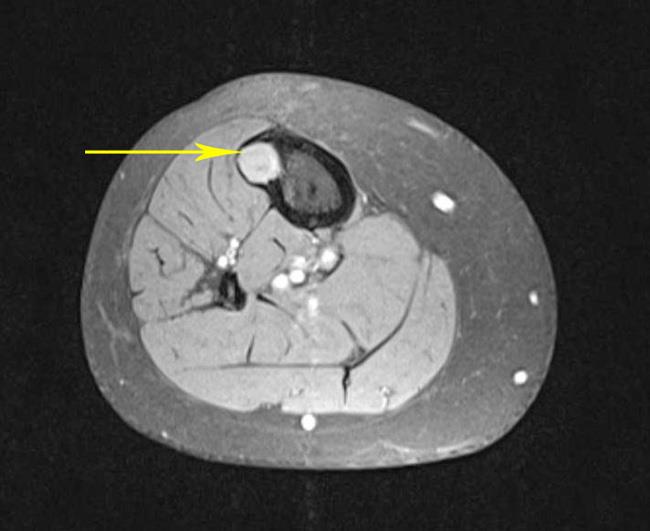 In this cross-section CT scan of a tibia (shinbone), a bone tumor shows up clearly as bright white against the darker color of the bone.

You lie as motionless as possible on a table that slides into the center of the cylinder-like CT scanner. The process is painless. An x-ray tube slowly rotates around you, taking many pictures from all directions. A computer combines the images to produce a clear, two-dimensional view on a television screen.

You may need a CT scan if you have a problem with a small, bony structure or if you have severe trauma to the brain, spinal cord, chest, abdomen, or pelvis. Sometimes, you may be given a dye or contrast material to make certain parts of your body show up better.

A CT scan costs more and takes more time than a regular x-ray. It can be done in either a hospital setting or an outpatient imaging center.

Magnetic resonance imaging (MRI) is another diagnostic imaging technique that produces cross-sectional images of your body. Unlike CT scans, MRI works without radiation. The MRI tool uses magnetic fields and a sophisticated computer to take high-resolution pictures of your bones and soft tissues. Tell your doctor if you have a pacemaker, implants, metal clips, or other metal objects in your body before you undergo an MRI scan. 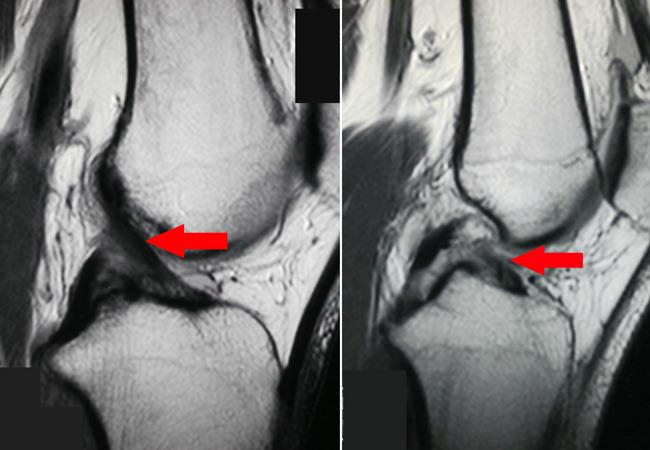 (Left) This MRI image of a knee taken from the side shows a healthy ACL. (Right) This MRI shows a torn ACL that has caused the patient's knee joint to become unstable.

You lie as motionless as possible on a table that slides into the tube-shaped MRI scanner. The MRI creates a magnetic field around you and then pulses radio waves to the area of your body to be pictured. The radio waves cause your tissues to resonate.

A computer records the rate at which your body's various parts (tendons, ligaments, nerves, etc.) give off these vibrations, and translates the data into a detailed, two-dimensional picture. You will not feel any pain while undergoing an MRI, but the machine may be noisy.

An MRI may be used to help diagnose torn knee ligaments and cartilage, torn rotator cuffs, herniated disks, osteonecrosis, bone tumors, and other problems. It may take from 30 to 60 minutes to do the study. Like a CT scan, an MRI scan may be done in a hospital or at an outpatient imaging center.

Ultrasound. Ultrasound uses high-frequency sound waves that echo off the body. It is painless and noninvasive, and does not require radiation. Ultrasound is used most often to look for blood clots, but can also show other problems, such as a Baker's cyst behind the knee or even a rotator cuff tear in the shoulder.

Bone scan. A bone scan uses a small amount of radioactive material to identify areas of increased bone activity. The material is injected into a vein and is absorbed by areas that are forming new bone, such as a healing fracture, bone tumor, or bone infection.

The scan is done several hours after the injection. The radioactive material is eliminated quickly from the body.

A bone scan has the advantage of showing bone activity throughout the entire body.