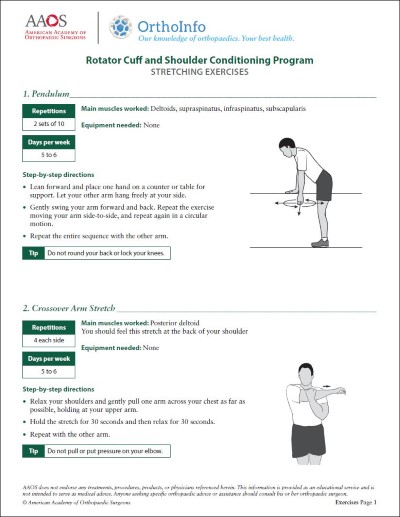 In 2006, approximately 7.5 million people went to the doctor's office for a shoulder problem, including shoulder and upper arm sprains and strains. More than 4.1 million of these visits were for rotator cuff problems.

Warning Signs of a Shoulder Injury

If you are experiencing pain in your shoulder, ask yourself these questions:

If you answered "yes" to any one of these questions, you should consult an orthopaedic surgeon for help in determining the severity of the problem.

Most problems in the shoulder involve the muscles, ligaments, and tendons, rather than the bones. Athletes are especially susceptible to shoulder problems. In athletes, shoulder problems can develop slowly through repetitive, intensive training routines. This illustration of the shoulder highlights the major components of the joint.

Some people will have a tendency to ignore the pain and "play through" a shoulder injury, which only aggravates the condition, and may possibly cause more problems. People also may underestimate the extent of their injury because steady pain, weakness in the arm, or limitation of joint motion will become almost second nature to them.

Sometimes, one of the shoulder joints moves or is forced out of its normal position. This condition is called instability, and can result in a dislocation of one of the joints in the shoulder. Individuals suffering from an instability problem will experience pain when raising their arm. They also may feel as if their shoulder is slipping out of place.

Impingement problems can occur during activities that require excessive overhead arm motion. Medical care should be sought immediately for inflammation in the shoulder because it could eventually lead to a more serious injury.

Shoulder Injuries in the Throwing Athlete

Early detection is the key to preventing serious shoulder injuries.

Often, an orthopaedic surgeon will prescribe a series of exercises aimed at strengthening the shoulder muscles.

Here are some easy shoulder exercises that you can do to strengthen your shoulder muscles and prevent injuries.

Stand facing a wall with your hands on the wall and your feet shoulder-width apart. Slowly perform a push-up. Repeat five times. Hold for a count of five. Perform twice a day.

Sit upright in a chair with armrest, with your feet touching the floor. Use your arms to slowly rise off the chair. Hold for a count of five. Repeat five times. Perform twice a day.

Anti-inflammatory medication also may be prescribed to reduce pain and swelling.