There are many different types of implants. The brand and design used by your doctor or hospital depends on many factors, including:

Your surgeon will discuss with you the type of implant that will be used for your knee replacement surgery.

In total knee replacement, damaged bone and cartilage are removed and replaced with metal components that recreate the surface of the joint.

Implants are made of metal alloys, ceramic material, or strong plastic parts. Up to three bone surfaces may be replaced in a total knee replacement:

Components are designed so that metal always borders with plastic, which provides for smoother movement and results in less wear of the implant.

For simplicity, the knee is considered a "hinge" joint because of its ability to bend and straighten like a hinged door. In reality, the knee is much more complex because the bone surfaces actually roll and glide as the knee bends. 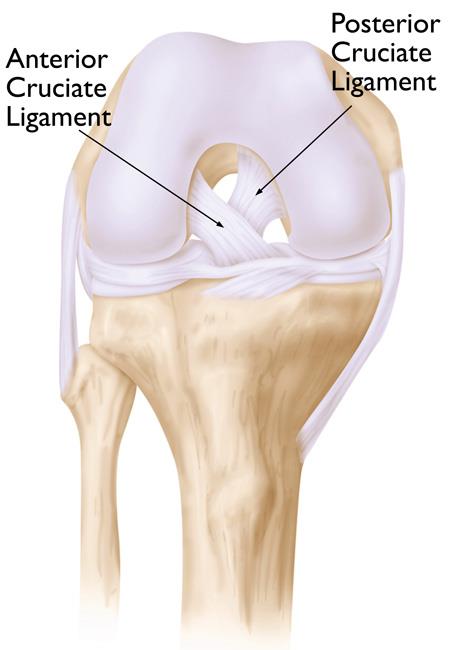 In a healthy knee, ligaments support the joint.

Current implant designs recognize the complexity of the joint and more closely mimic the motion of a normal knee. For example, ligaments keep the joint stable in a healthy knee. Some implant designs preserve the patient's own ligaments, while others substitute for them.

Several manufacturers make knee implants and there are more than 150 designs on the market today.

Gender-specific implants. Many manufacturers have developed components for the end of the thighbone which more closely match the average woman's knee. At this time, there is no research to show that "gender specific" implants last longer or provide better function than standard implants.

One of the most commonly used type of implant in total knee replacement is a posterior-stabilized component. In this design, the cruciate ligaments are removed and parts of the implant substitute for the posterior cruciate ligament (PCL).

The tibial component has a raised surface with an internal post that fits into a special bar (called a cam) in the femoral component. These components work together to do what the PCL does: prevent the thighbone from sliding forward too far on the shinbone when you bend your knee. 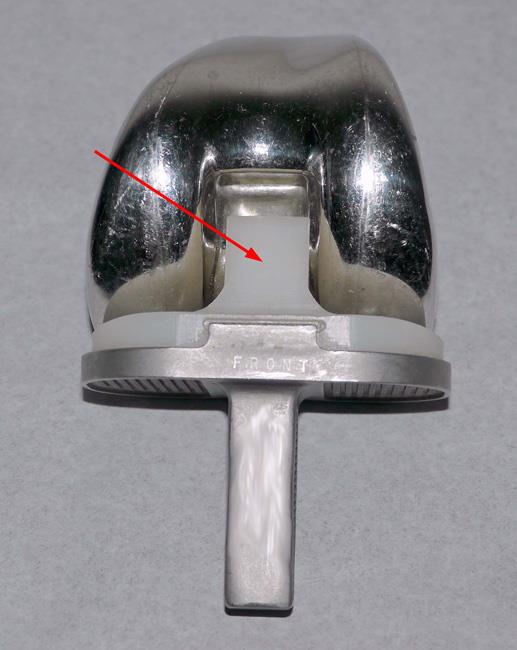 Parts of a posterior-stabilized implant (arrow) replace the PCL.

A cruciate-retaining component is designed with grooves to accommodate a patient's PCL.

Bicruciate-retaining components are relatively new to the market and there are not yet many studies that demonstrate the pros and cons of this design.

Although replacing the total knee joint is the most common procedure, some people can benefit from just a partial knee replacement.

If only one side of the knee joint is damaged, smaller implants can be used (unicompartmental knee replacement) to resurface just that side.

In a unicompartmental (partial) knee replacement, only the damaged part of the knee is replaced.

Most patients get a fixed-bearing implant. In this design, the polyethylene of the tibial component is attached firmly to the metal implant beneath. The femoral component then rolls on this cushioned surface.

In a mobile-bearing knee the polyethylene insert can rotate short distances inside the metal tibial tray. This is designed to allow patients a few degrees of greater rotation to the medial and lateral sides of their knee.

Durability. In some cases, excessive activity and/or extra weight can cause a fixed-bearing prosthesis to wear down more quickly. Worn components can loosen from the bone and cause pain. Loosening is a major reason some artificial joints fail.

If you are younger, more active, and/or overweight, your doctor may recommend a rotating platform/mobile-bearing knee replacement. Although these implants have been designed for potentially longer performance with less wear, research has not yet established improved durability or function with mobile-bearing implants.

The metal parts of the implant are made of titanium or cobalt-chromium based alloys. The plastic parts are made of ultra high molecular weight polyethylene. Some implants are made of ceramics or ceramic/metal mixtures. Whether metal or ceramic, implants weigh between 15 and 20 ounces, depending on the size selected.

There are different types of fixation used to connect knee implants to the bone.

Your surgeon will evaluate your situation carefully before making any decisions about components and fixation. Do not hesitate to ask what type of fixation will be used in your situation and why that choice is appropriate for you.

In a unicompartmental (partial) knee replacement, only the damaged part of the knee is replaced.

How long a knee replacement lasts depends on several factors, including activity level, weight, and general health. Just as wear in the natural joint contributed to the need for a replacement, wear in the implant may eventually require a second surgery (called a joint revision).

In a revision procedure, some or all of the parts of the original implant are removed and replaced with new components.

Revision components typically have longer stems which fit into the femur and tibia. They may also have attached metal pieces called augments which substitute for missing bone.

Revision components usually have longer stems that insert into the bones.

In cases where the knee is very unstable and a large amount of bone is missing, it may be necessary to join the femur and tibia with a metal "hinge" in the center.