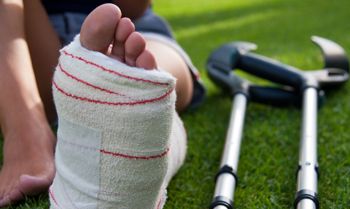 Lisfranc (midfoot) injuries result if bones in the midfoot are broken or ligaments that support the midfoot are torn. The severity of a Lisfranc injury can vary widely — from a simple injury involving one midfoot joint to a complex injury involving many midfoot joints and broken bones. Midfoot fracture dislocations are named after French surgeon Jacques Lisfranc de St. Martin, who served in the Napoleanic army in the 1800s and observed midfoot injuries in cavalry soldiers.

The midfoot is the middle region of the foot, where a cluster of small bones forms the arch on the top of the foot. From this cluster, five long bones (metatarsals) extend to the toes.

The bones are held in place by strong ligaments, known as the Lisfranc joint complex, that stretch both across and down the foot. However, there is no connective tissue holding the first metatarsal to the second metatarsal. A twisting fall can break or shift (dislocate) these bones out of place. The Lisfranc joint complex includes the bones and ligaments that connect the midfoot and forefoot. Lisfranc injuries include ligament strains and tears, as well as fractures and dislocations of bone (far right).

The Lisfranc midfoot joint complex has very litle motion and is critical in stabilizing the arch for push off during walking (gait). During walking, the midfoot transfers the forces generated by the calf muscles to the front of the foot. If a Lisfranc injury is left untreated, instability of the arch can persist, resulting in the collapse or flattening of the foot.

The midfoot will be affected if the bones are broken (fractured) or the ligaments are torn. Injuries can vary, from a simple injury that affects only a single joint to a complex injury that disrupts multiple different joints and includes multiple fractures. (Left) A subtle injury to the midfoot with widening between the first and second metatarsals (circle), compared with the normal foot on the left. (Center) A fracture of the second metatarsal (arrow) and a fracture of the cuboid (circle). (Right) A very severe injury of the foot from a high-energy event. It has resulted in a complete dislocation of the entire midfoot (box). Because no bones have been broken, a fusion may be recommended, given the high risk for future arthritis.

Lisfranc injuries tend to damage the cartilage of the midfoot joints. Cartilage covers the ends of bones in the joints, allowing the joints to move smoothly. If severe midfoot injuries are not properly treated, damage to the cartilage and increased stress at the midfoot joints can result in arthritis and collapse of the arch, which requires complex surgery to correct. Even with successful surgery for the Lisfranc injury, arthritis can still develop in later life.

A low-energy Lisfranc injury can happen with a simple twist and fall. It is also commonly seen in football and soccer players when one player lands on the back of another player's foot while the foot is flexed downward in the push-off position. Lisfranc injuries can occur in football or soccer when one player lands on the back of another player's foot while the foot is flexed downward in the push-off position.

More severe injuries occur from direct trauma, such as a fall from a height or a motor vehicle collision. In these high-energy lisfranc injuries, multiple foot fractures and joint dislocations can occur, along with injuries to the back and other limbs.

These are the most common symptoms of Lisfranc injury:

You should seek care from an orthopaedic surgeon if standard treatment for a sprain (rest, ice, elevation) does not relieve pain and swelling, or if you are unable to bear weight after the injury.

The discoloration on the bottom of the foot is very suggestive of a Lisfranc injury.

After talking with you about your symptoms and discussing your concerns, your doctor will examine your foot and ankle. Although some of the physical tests the doctor will perform may be painful, none of them will make the injury worse.

Specific things your doctor will look for include:

Other tests that the doctor may order to help confirm your diagnosis include:

X-rays. Broken bones and the position of the bones can be seen in an X-ray image. An X-ray also can show the alignment of the Lisfranc joint. Any change in the normal alignment of the joint may suggest injury to the ligaments.

If the injury happened after a simple twist and fall (a low-energy injury), the doctor may ask that an X-ray be taken with the patient standing. In this case, the doctor is looking for a ligament injury, especially if the bones are not expected to be broken. Injuries will not be made worse from a standing (weightbearing) X-ray, nor will an injury that might be treated without surgery progress to need surgery if this test is done. The doctor may also take X-rays of your uninjured foot so they can compare the alignment of the bones in the injured foot to the uninjured side. (Left) In this non-weightbearing X-ray, the Lisfranc injury does not show any abnormal widening (arrow). (Right) The tear of the Lisfranc ligament is more evident in this weightbearing stress X-ray, showing a widening of the joint.

Magnetic resonance imaging (MRI) scan. Because subtle Lisfranc injuries can be difficult to diangose, your doctor might order an MRI scan. MRI scans do a better job of imaging the soft tissues around the bone, including the ligaments that are injured in a Lisfranc injury. This test is not required to diagnose a Lisfranc injury, but it may be helpful in cases where the diagnosis is in doubt.

Computerized tomography scan (CT ) scan. CT scans are more detailed than X-rays and can create cross-section images and 3-D renderings of the injured foot. Because a CT scan will help evaluate the exact extent of the injury and the number of joints involved, your orthopaedic surgeon may order this test to help plan for surgery. However, this test is not required to diagnose or treat a Lisfranc injury.

Care of Casts and Splints

Arthritis of the Foot and Ankle

Treatment for a Lisfranc injury depends on the severity of the injury.

If there are no fractures or dislocations in the joint and the ligaments are not completely torn, nonsurgical treatment may be all that is necessary for healing. A nonsurgical treatment plan includes wearing a non-weightbearing cast or boot for 6 to 8 weeks. You must be very strict about not putting weight on your injured foot during this period. This then progresses to weightbearing in a removable cast boot or an orthotic.

Your doctor will want to follow up with you regularly and take additional X-rays to make sure your injury is healing well. During the course of follow up, if there is any evidence that the bones in the injured joint have moved, surgery will be needed to put the bones back in place.

Surgery is recommended for injuries with displaced fractures (broken bones) or with abnormal positioning (instability) of the joints. The goal of surgical treatment is to realign the joints, return the fractured bone fragments to a normal position, and restore stability to the midfoot.

These procedures can be used to treat Lisfranc injuries:

Open reduction internal fixation (ORIF). In this procedure, the surgeon makes an incision on top of the foot, positions the bones correctly (reduction), and secures the bones in place with plates or screws. Because the plates or screws will be placed across joints that normally have some motion, some or all of this hardware may need to be removed at a later date. This can vary from 3 to 5 months after surgery, and is at the surgeon's discretion.

Occasionally, the hardware may break before it is removed. This is not unusual when screws or plates span bones that have some movement. Metal can fatigue and fail under these conditions, just as a paperclip will fail if bent repeatedly. The surgery is often successful even if some of the hardware breaks.

Various methods of internal fixation can be used to fix Lisfranc injuries depending on the injury pattern. (Left) Multiple screws can be used. (Center) A combination of plates and screws are sometimes required when fractures are present in addition to a torn ligament. (Right) Plates that span the joints are also an excellent method of fixation.

Midfoot fusion.  In some patients and types of Lisfranc injuries, fusion of the injured midfoot bones may be recommended as the surgical treatment. The goal of a fusion surgery is essentially to realign the injured bones and have them heal together so that a joint no longer exists between them. Because the midfoot joints have very little motion to begin with, fusion can be an appropriate treatment to eliminate pain and restore function to the midfoot.

In this procedure, the surgeon removes cartilage from the bones and uses metal plates, screws, or staples to compress the bones together so that they heal to one aother. The hardware will not typically need to be removed because the joints are fused and will not move after they heal. Radiographs showing a complete midfoot dislocation (left) before and (right) 2 years after fusion.

Rehabilitation. After surgery (ORIF or fusion), a period of non-weightbearing for 6 to 8 weeks is typically recommended in a cast or cast boot. Weightbearing is started while the patient is in the boot if the X-rays look appropriate after 6 to 8 weeks. The amount of weight a patient can put on their foot, as well as the distance the patient is allowed to walk, is at the surgeon's discretion.

The goal in every patient is to have a pain-free, stable midfoot and return to all pre-injury activities. This goal can be achieved with either ORIF or fusion surgery in all types of patients. However, it is important to note that: