Bone and joint conditions, injuries and surgeries can be painful. Orthopaedic surgeons are committed to helping their patients recover and live as comfortably and pain free as possible, while also ensuring overall health and safety.

There are various ways to manage pain and discomfort. Patients and their doctors should work together to determine the most effective and safest course of action. Depending on the severity of the condition, pain management strategies can include:

When used as recommended, prescription painkillers can alleviate severe pain, especially during the hours and days immediately following an injury or major surgery. However, opioids are not a long-term pain solution and, when misused, can lead to addiction and even death. 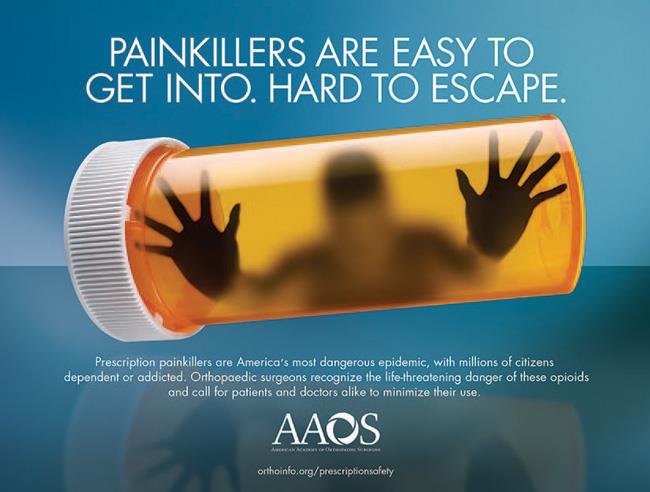 The AAOS public service campaign "Painkillers Are Easy to Get Into. Hard to Escape." highlights the dangers of opioid abuse.

Numerous studies and alarming data have exposed the side effects, addictive dangers, and devastating consequences of opioid use and misuse. In fact, the United States is in the midst of an opioid epidemic, with millions of people dependent on or addicted to prescription painkillers such as codeine, morphine, oxymorphone, tramadol, hydrocodone, and oxycodone. A 2016 Washington Post/Kaiser Family Foundation survey found that 1 in 3 patients (34%) who recently took opioids for at least 2 months report being addicted or dependent.

According to the U.S. Department of Health and Human Services:

In addition, patients already taking opioids prior to surgery have greater post-surgical pain, and face a higher risk of pneumonia, over-sedation, and even death.

Given the dangers of prescription opioids, how can patients safely and effectively manage pain?

While minimizing patient discomfort remains an important goal of orthopaedic care, great caution should be used in prescribing and taking opioids. Orthopaedic surgeons, and all physicians and health care professionals, are working together to change the culture of pain management, with the ultimate goal of significantly reducing opioid use and misuse.

Share this information about prescription drug safety on your social media sites. Be sure to add #PrescriptionSafety to your posts.

Information Statement on Opioid Use, Misuse, and Abuse in Orthopaedic Practice

Related Resources from Other Organizations:

U.S. Department of Health and Human Services: The Opioid Epidemic by the Numbers